Members of Canadian Militia stand over a dead Fenian soldier 1870

The Fenian Brotherhood, a U.S. arm of the Irish Republican Brotherhood, was active from the 1850’s to the 1880’s. Formed to fight for Irish sovereignty, the general plan was to capture British colonies to the north in what is now Canada, therefore allowing negotiations for Irish independence.

Canadian confederation had been talked about for years, but the threat of Fenian invasion perhaps expedited the formation of Canada in 1867.

Fenian militants, operating from Vermont, assembled on May 25 to orchestrate a second invasion of the Montreal region (a similar Fenian expedition under Samuel Spear had invaded Canadian territory in 1866). O’Neill was arrested near the border by a United States Marshall and, after a lengthy firefight, the Fenian force disbanded. 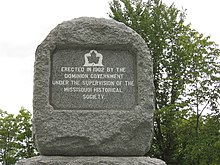 A force of Canadian militia and armed citizens awaited the Fenians at the summit of Eccles Hill. The Canadians opened a withering fire when the Fenian force reached the border, resulting in the death of a Fenian soldier. This halted the advance of the Irish-Americans, who took cover and returned fire. Lieutenant-Colonel William Osborne Smith hurried to the field with a force of militia volunteers. Together with the armed citizens, the Canadian militia charged the Fenian positions. The Fenians retreated, leaving behind their artillery and two men dead. The Canadians suffered a number of casualties during the engagement but none were fatal. Information provided by Thomas Billis Beach, a double agent also known as Henri Le Caron, was instrumental in ensuring that the Canadians were prepared for the Fenian assault.

Read more about the Fenian Brotherhood: