In 1909, the city of Prince Albert, Saskatchewan, Canada began construction on a hydroelectric dam spanning the North Saskatchewan River. Known as the La Colle Falls Dam, the structure was intended to become the sole source of the growing city’s power needs but instead, it was simply a source of financial woe.

The project was actually sold to Saskatchewan by one of the engineers of the Niagara Falls project, but he did little after selling the concept, leaving the dam’s actual construction to the ill-equipped and inexperienced local engineers. Soon after the dam’s approval, construction costs skyrocketed, topping $3 million, an amount nearly unheard of at the time. The project ended up nearly bankrupting the city of Prince Albert, which was in a financial boom at the time that the project was proposed. After nearly ruining the town it was supposed to save, the dam was simply abandoned like a bad memory in 1913.

Today, the dam still sits decaying and incomplete. It stretches about a third of the way across the North Saskatchewan River and is slowly being reclaimed by nature, graffiti, and underage drinking. Most recently, efforts have been made to look at the structure architecturally and have it declared a national landmark.

Know Before You Go 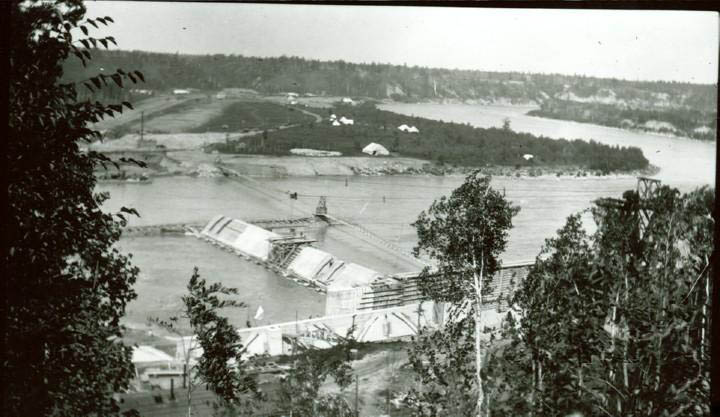 An article from 2013 marks the 100th anniversary of the colossal blunder:

The blunder of Saskatchewan’s northern dam, 100 years on

An avid history buff is marking the 100th anniversary of the day the plug was pulled on a massive hydroelectric project that was started on the Saskatchewan River, north of Prince Albert, Sask. 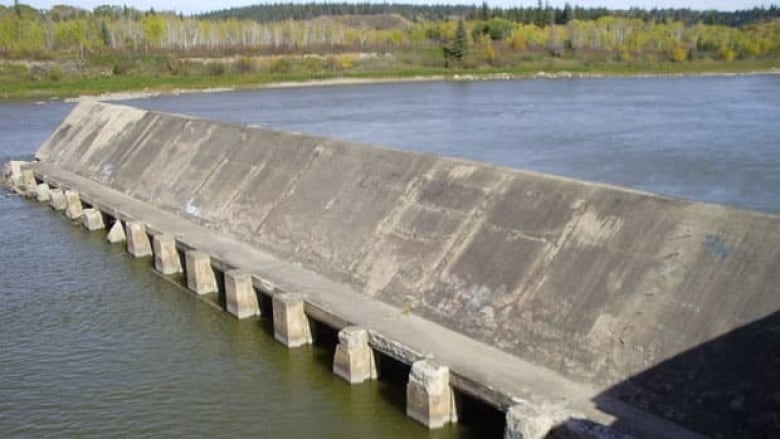 An avid history buff is marking the 100th anniversary of the day the plug was pulled on a massive hydroelectric project that was started on the Saskatchewan River, north of Prince Albert, Sask.

What was launched as the La Colle Falls Hydroelectric Development instead became a multi-million dollar monument to lofty ambitions, and a financial millstone for Prince Albert taxpayers for decades to come.

“The dam was one-third finished, into the river,” Paul Van Pul, a hydraulic archaeology surveyor who has written extensively on the La Colle blunder, said Tuesday. “They never managed to start building the power station.”

According to Van Pul, who checked out the remnants of the project, there are only a few holes in the ground that could have been the start of foundation work for a power plant.

The unfinished dam, however, is a prominent — if odd-looking — feature on the river. 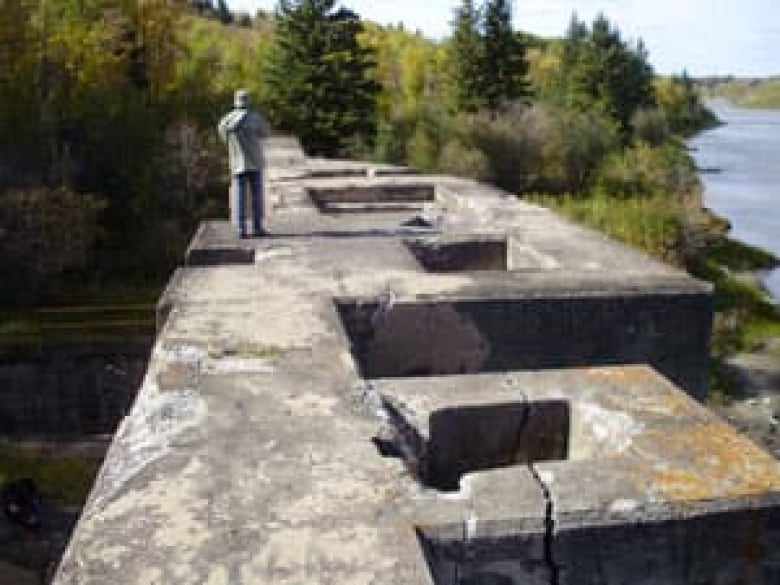 Some have suggested the unfinished La Colle Falls dam should be designated a heritage site. (Courtesy: Paul Van Pul)

By the time the project was halted two years of construction work had gone into it and Prince Albert had spent $3 million, or about $62 million in today’s terms, adjusting for inflation using a Bank of Canada calculator.

“The project was, in fact, too big for the engineers from Prince Albert,” Van Pul believes, when asked how it was that the plan was scrubbed. “They had to depend on the city engineer at the time who had no experience at all building such a big, complicated project.”

The city was sold on a hydroelectric dam by the engineer who developed Niagara Falls. That expert, however, rarely checked in on how the La Colle venture was proceeding.

The burden of loans used to finance a project that was never completed nearly drove Prince Albert into bankruptcy, and it wasn’t until 1965 that the debt was paid off.

“And the thing is, they almost got there,” he added, wistfully.

Van Pul is hoping the concrete structure that remains is designated a heritage site.

“It’s a cautious reminder,” he said, even as cities embark on large-scale projects today. “Something can go wrong and then we’re stuck with it for the next 50 years.”