UPDATE to the last UPDATE October, 2020:  No, it hasn’t been demolished.  Had a long phone conversation with a fellow who is doing some research on Bounty and area, and apparently my information was false. What remains of Bounty still stands in all its glory, and the grass is even cut!

The linked description of what’s left of Bounty is pretty accurate, though the author  was obviously from ‘away’.  There’s no way he would have heard the stories.  The murmers of local folk who witnessed the odd — no, the wierd, the creepy, tales associated with this little community. Rumours of drive-by shootings and hangings were precursors to actual feuds that ended with dog shootings and arson.

While living in Outlook, my wife and I once took a drive west on Highway 15 to check out what was left of Bounty.  Though it was a beautiful, sunny day, I have to admit the hair on the nape of my neck fairly stood on end as we slowly drove down the short main street, wondering (not necessarily without reason), whether eyes appraised us from behind tattered curtains and broken glass in seemingly abandoned houses.

The one paved street in town is now crumbling, kochia weeds and grass spilling from cracks that have gone unfilled since the last of Bounty’s citizenry moved away. A pickup truck is parked by the curb, seemingly only a flat tire preventing it from use.  It must have been a beautiful little town at one point, and even in its present state, the towering poplars lining main street are still not without charm.

The Bounty Theatre has since been moved to Outlook by a group of ambitious people (surely to rescue it from marauding vandals) and sits on a new foundation near the town’s museum awaiting restoration.  The old fair grounds on the west side of Bounty continue to decay, but stand as a testimony to what must have been at one time a bustling and successful agricultural fair.

Please check out this link. 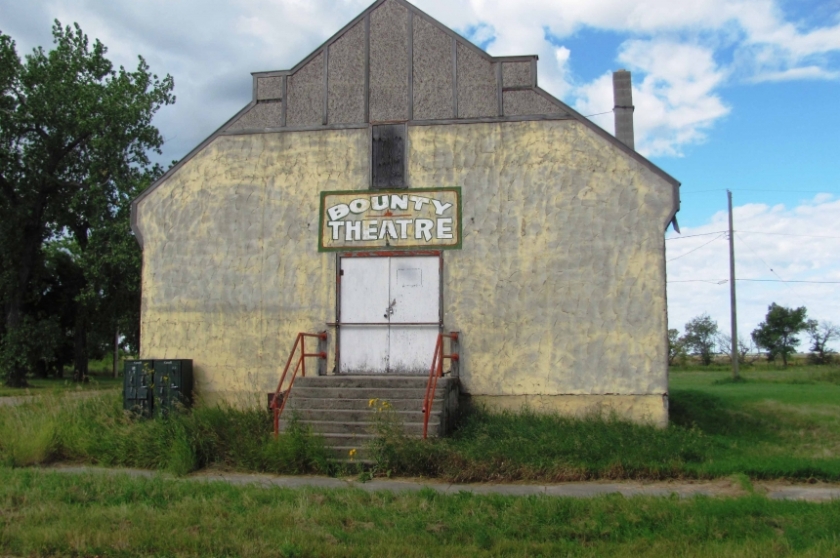