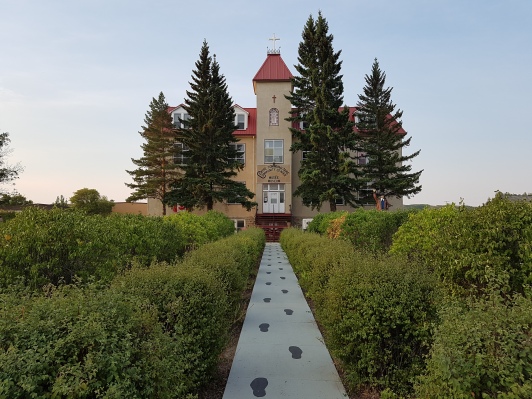 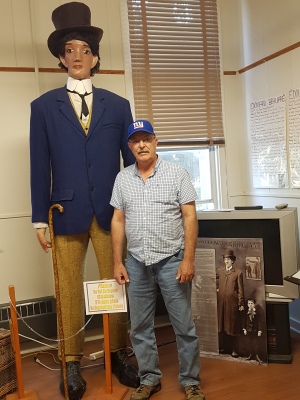 The Willow Bunch Museum inhabits the old convent in town, and the Willow Bunch Giant inhabits the museum. The picture above shows just how big Edouard Beaupre really was at 8 feet 3 inches and 375 pounds. Edouard died in 1904 at the age of 23 from a hemorrhage in his lungs brought on by tuberculosis. His body was bounced around for a number of years and ended up at the University of Montreal until 1989, at which time he was cremated and his ashes repatriated to his home. He is buried in front of the museum: 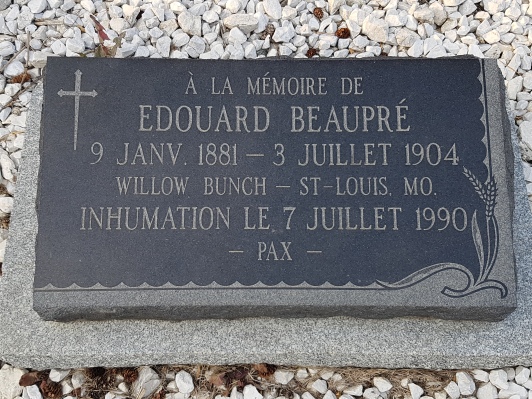 Édouard Beaupré was born on January 9, 1881. He was the first of 20 children born to Gaspard Beaupré and Florestine Piché, a Métis. When he started school at seven he was of average height, but at nine he was already 1.85 metres (6.1 ft), and at 11 he was over 2 metres (6.6 ft) tall. He stopped going to school at this time, but not because he was simple. He spoke French, English, Méchif, Cree and Sioux. He was an excellent horseman but at the age of 17 he reached the height of 2.15 metres (7.1 ft) and he abandoned the trade.

His father worked as a freighter for the trader Jean-Louis Légaré who was a cattle and horse rancher and also Édouard’s godfather. For several years he accompanied his father on his trips to Moose Jaw, Regina and Montana.

He signed a contract on July 1, 1904 with the Barnum and Bailey circus to appear at the St. Louis World’s Fair. He died of a pulmonary hemorrhage, a complication of his tuberculosis, at the fairground hospital on July 3, 1904. At the time he was 2.52 metres (8.3 ft).

At the circus’s request, the undertaker embalmed the body. However, the circus refused payment, so they decided to preserve the body which they then put on display in St. Louis. Through an unknown connection, the body made it to the Museum of Eden in Montreal and put on display there, but the exposition drew such a crowd that the authorities had to come and shut it down. The body was then passed on to a Montreal circus, but they quickly went bankrupt and so dumped the body in a warehouse. It sat there for a few years, until in 1907, when two kids came across the body as they were playing in the warehouse. The Université de Montréal claimed the body, and, after doing some research and an autopsy, mummified the body of the Giant and put him up in a glass display case in the University.

The family only discovered he was in Montreal in 1967, and so in 1975 started the process to try and get the body back to Willow Bunch for a proper burial. The University refused and claimed rights over the body, and said that they wanted to continue doing research and didn’t want the body displayed anywhere else. In 1989 the family once again tried, this time bringing the media with them as well to put some pressure on the University. This time the effort worked, and so the University decided they could cremate the remains, to prevent anyone from grave-robbing the body. It took two big urns to contain the Giant’s ashes. Finally, in 1990, the body of “le Géant Beaupré” or “le Géant de Willow-Bunch” was brought back to Willow Bunch. The family had a memorial service, and his remains now lie in front of the Willow Bunch Museum. 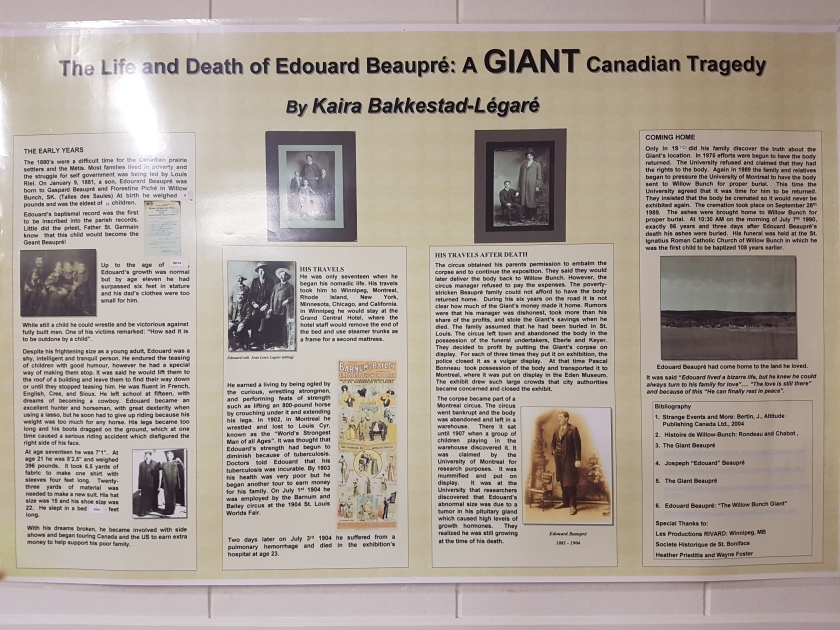 The Museum (a large slideshow so may take a few moments to load):