Character:  Wes Humboldt, played by Mike O’Brien. Wes was the owner of the local liquor store and insurance agency.

Mike O’Brien, a longtime CBC comedy writer and an actor who played a recurring character on “Corner Gas,” has died of cancer. He was 51.

O’Brien mixed humour and pathos in chronicling his four-year illness on his blog The Big Diseasey and had posted a meditation about faith — or lack thereof — just hours before his death.

He died at his Winnipeg home on Sunday night, said his agent Lisa Marie Schwartz.

“(He) was not only an amazing actor but a great friend,” Schwartz said in a statement.

“Corner Gas” executive producer Virginia Thompson said O’Brien’s blog, which included satirical observations on his condition and poignant musings about his time left, is his legacy.

O’Brien’s ability to find humour in even the bleakest situation was one of his defining traits, Thompson said.

“The thing about people that truly understand comedy is they have a way of twisting things so that we can see things in a different light. They see the irony of the world and they’re able to deliver it to us,” Thompson said in a telephone interview.

Last November, O’Brien blended fact and humour in a mock obituary he penned for his blog.

Facts about his life, such as his childhood spent in Victoria and Inuvik and his adult years living in Regina and Winnipeg, appeared alongside a self-deprecating summary of his professional accomplishments.

“As an actor, he made you feel like he was standing right where the director told him to stand; a skill he shared with Olivier, Brando and many puppets,” O’Brien wrote.

“As a radio producer, he boosted television ratings. As a comedy writer, he was tall.”

In reality, O’Brien’s resume was both more diverse and more celebrated. He began his career as a journalist for the Medicine Hat News and Regina Leader Post and eventually switched to acting.

He landed recurring roles on some prominent Canadian comedies and is best known for his portrayal of Wes Humboldt, the combination liquor store owner and insurance salesman on CTV’s “Corner Gas.”

Thompson said O’Brien quickly became a beloved member of the “Corner Gas” family, adding that cast members organized a fundraiser for him and his family when his cancer was first diagnosed in 2011.

“Sad to say, the lovely & clever Mike O’Brien — who, among many things, played Wes Humboldt on ‘Corner Gas’ — has passed away. #CancerSucks,” Butt tweeted.

O’Brien also had a recurring role on the HBO Canada comedy “Less than Kind.”

But it was radio where he spent the better part of his later career, working largely as a comedy writer for the CBC.

On his blog, O’Brien penned a largely serious post on the subject of faith in the hours before he died, downplaying the role of religion in his life and expressing more confidence in his medical team.

He also referenced the wife and four-year-old son he left behind, citing optimism for their future as a key source of comfort.

“Above all, I have faith Robin will guide Will toward a fine life,” he said. “That’s the belief I treasure the most.” 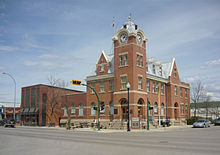 Humboldt Post Office, which is now home of the Humboldt & District Museum

Named after German explorer Alexander von Humboldt, Humboldt began as a telegraph station located on the Carlton Trail, a wagon route used in the early days of Western Canada as a route from Fort Garry (Winnipeg) to Fort Edmonton. The name “Humboldt” was approved in 1875 for a site in the North West Territories along the Canadian Pacific Telegraph Line at which a repair station was built (8 km south-west of the present city site). Built in 1878, the Humboldt Telegraph Station played an integral part in communications for the developing West.

With the Métis uprising led by Louis Riel taking place at Batoche just 100 km northwest, Humboldt became the only communication link between Prime Minister John A. Macdonald and his forces in the West, thus a site of strategic significance. General Frederick Middleton arrived in April 1885 with 950 soldiers, established a garrison at the station, and used it as his base for scouting operations. At that time, the Humboldt station was crucial, since the telegraph line further west was periodically cut – so Humboldt was the last secure link to the East.

On May 1, 1885, Humboldt became the site of a large supply depot under Maj. Lt.-Colonel G. T. Denison of the Governor Generals’ Body Guard. A combined force of approximately 460 men built an elaborate series of entrenchments, converting the station into a fortified military encampment to protect the supplies. The troops left Humboldt in July 1885. The area was also the site of the first stagecoach robbery in Western Canada. Parts of the Carlton Trail in the form of wagon tracks/ruts still exist in the Humboldt area.

Humboldt in its beginnings was primarily German Catholic. It became the largest settlement in the Territorial Abbey of Saint Peter-Muenster also called St. Peter’s Colony established by Benedictine monks from St John’s Abbey in Collegeville, Minnesota. Immigration to the area from both the Northern Plains states of the USA and Germany was promoted by the German American Land Company. Many immigrants from the German Empire settled in areas in and around Humboldt such as Muenster, Fulda, Pilger, St Gregor and Englefeld. Immigrants from the Russian Empire who were ethnic Germans settled in the area west of Humboldt and south of the hamlet of Carmel.

After being established as a community, Humboldt became an important location in Saskatchewan previously known as the “Heart of the Sure Crop District” for its reliable growing weather, which led the town to become a centre for farming equipment and supply businesses.

Notable people who were born, grew up in or established their fame in Humboldt: