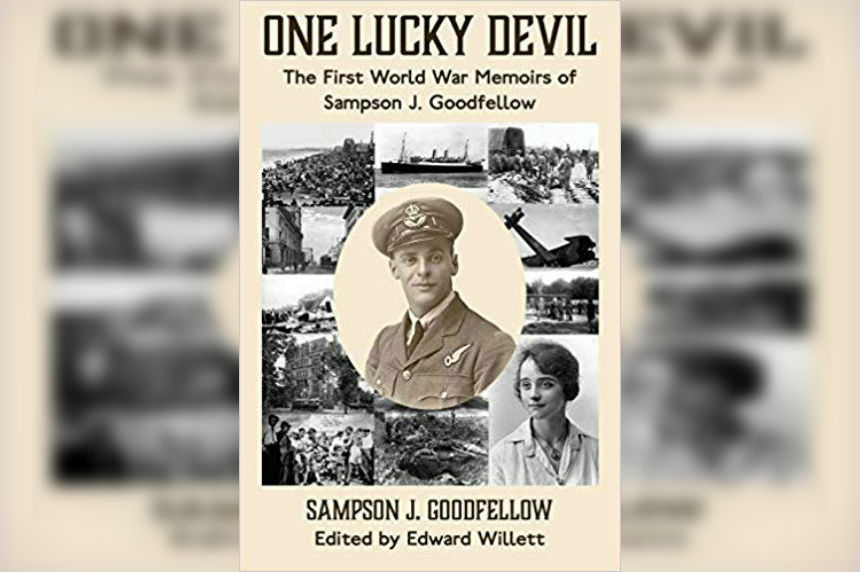 Decades after Sampson J. Goodfellow returned to Canada from the First World War his stories are part of a new book written by his grandson-in-law.

Edward Willett and his wife Margaret now live in the Regina home that Goodfellow and his wife bought in 1939.

While preparing to paint the den, Willett discovered black notebooks with typed pages that appeared to be Goodfellow’s memoirs.

“I looked at them (the notebooks) and I thought: ‘this is a slice of history,’” Willett said.

The stories were first released in 2008 when Willett posted them on a blog.

Ten years later he edited the stories and added photos to publish ‘One Lucky Devil: The First World War Memoirs of Sampson J. Goodfellow’ as a book.

Willett said the book’s title comes from Goodfellow himself, in a way.

While a member of the Royal Flying Corps, Goodfellow’s plane was shot down and he was captured.

Officials listed Goodfellow as missing and some believed he was dead.

Desperate to find out what happened his fiancee’s family went to a fortune-teller.

“She said ‘you couldn’t kill that devil (Goodfellow)…he’s alive and trying to escape,’” Willett said.

Goodfellow established the “lucky” part over time with his penchant for staying alive in the worst circumstances.

“He got bombed while he was dropping off Palliser shells at an ammo dump at Passchendaele and if he’d stayed in his truck he would have been killed,” Willett said.

Goodfellow ended the war in a prisoner-of-war camp before moving back to Regina, where he lived with his wife Nancy for around 60 years.

“He was a philanthropist, he was an inventor. He has several patents related to grain handling machinery,” Willett said of Goodfellow’s life after the war.

While the memoir Goodfellow started writing before his death in 1975 sheds light on his life and time in the First World War, his grandson-in-law said it didn’t have much in the way of emotional descriptions of what happened.

“He’s very, very matter-of-fact. ‘This happened and this happened.’ What does come through is his personality,” Willett said.

‘One Lucky Devil: The First World War Memoirs of Sampson J. Goodfellow’ was released on November 1.