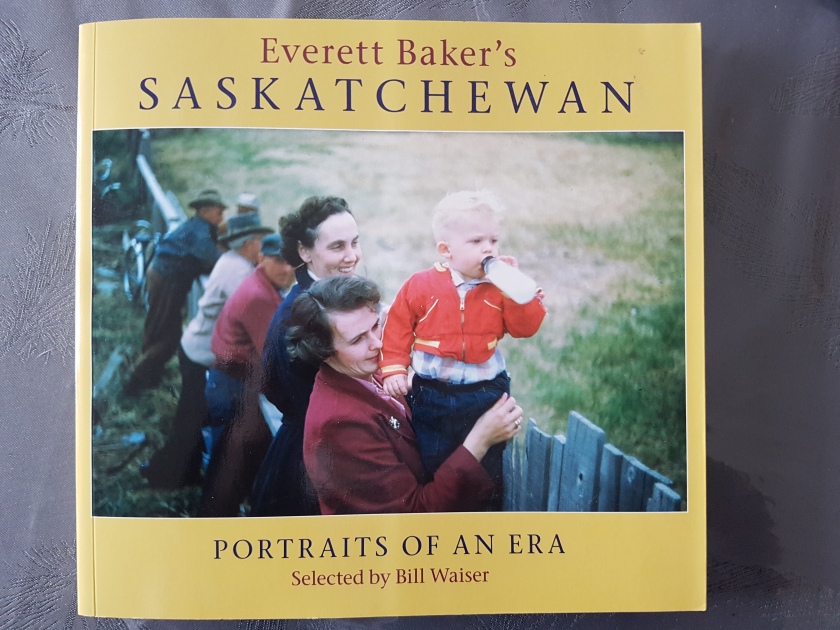 Who better to write the introduction to a book like this than eminent historian Bill Waiser?

William Everett Baker was not born in Saskatchewan, nor was he a Canadian citizen. But he spent a lifetime documenting the prairie’s rhythms, its peoples and its history.

He was born in Minnesota in 1893 and graduated in 1916 with a bachelor of science degree. He came into Saskatchewan on the CPR railroad’s ‘Soo Line’ as he peddled his People’s Home Library, and made so much money he was able to buy a half section of land around Aneroid, where he set up to start farming. The farm limped along until 1924, when he became manager of the Aneroid Co-operative Association. The co-op was wildly successful and in 1937, he was rewarded with a position as field man for the Saskatchewan Wheat Pool.

Maybe he was just trying to help out Sudeten refugee Hugo Haas, but in buying his used 35 MM Leica camera for one hundred dollars, Baker (perhaps unwittingly) set out to document life on the prairies throughout the middle of the twentieth century. One hundred dollars was a lot of money in 1939, but he justified the purchase as a means to illustrate his presentations as a field man.

During a period from 1940 to 1960, Baker took some ten-thousand plus photos, largely around the co-operative movement, but also of the changing seasons, community events and most important of all — the people. He would often have to coax people to pose for him.

Baker had a passion for history and in the 1940’s, he walked the Batoche battle sites, talking to locals to find the locations of events. In 1947, he arranged for W. B. Cameron, a survivor of the Frog Lake Massacre, to return to Lloydminster and revisit some of the battle sites.

He was a founding member of the Saskatchewan History and Folklore Society, and worked tirelessly to help identify and document historial points of interest for the 1955 provincial jubilee celebration. Funding was usually short for projects, and he would put on slide shows after which he would take up a collection to keep going. Often he would make up shortfalls out of his own pocket.

Passing away in 1981, he is buried in his beloved prairie soil at Swift Current. In retrospect, Saskatchewan is fortunate that Everett Baker bought that Leica camera. His photographic documentation of the province in the mid-twentieth century is truly a national treasure.

The reds were particularly vivid in the Kodachrome pictures:

Please enjoy this slideshow of photos extracted from the book. Note that it may take a few moments to load on your device. Unfortunately these reproductions do not do justice to the crisp, clean colours of Baker’s kodachrome film.